In England there were about eight hundred different markets in England where people had access to their food. Just to provide for the residents of London there was an intricate network of about sixteen different markets.

The markets would be set up with scattered stalls or stands with different foods, spices, and sometimes even livestock. Vendors would display their food in and around the stall they would be selling in.

In rural areas people made regular visits  to markets and fairs to get food. In the city people usually only went to the market about once a week. Things like meat, poultry, wines, cooking fats, and flour and spices were usually purchased weekly. Cities also sold specific goods such as herbs, cheese, or freshwater fish. 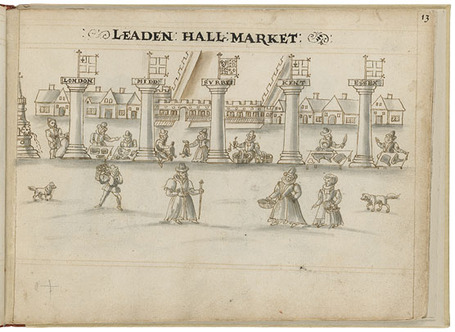 In a manuscript written by Hugh Alley, a government informer, called A Caveatt for the Citty of London. The manuscript was presented to the Lord Mayor in April of 1598. Inside the manuscript about seventeen different markets were depicted, one of them being the Leaden Hall Market shown at the left. This manuscript can be found In the Folger Shakespeare Library in Washington D.C.