Caught red-handed as a witch? Oops, bad news for you. But what lies in store for those denounced as witches? Read further at your own risk.

Inside the Courtroom: Witch Trials 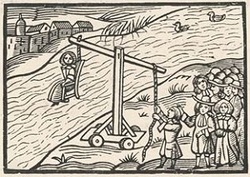 http://www.witchcraftandwitches.com/trials.html
Several laws were passed describing the levels of punishment for witches with the most severe punishment being execution.

To decide whether a person was guilty or innocent of witchcraft, the court administered many different types of tests. For instance, a notorious witch hunter named Matthew Hopkins utilized sleep deprivation to accuse people of witchcraft. After being kept awake all day and night for many days, the accused victim would be willing to admit anything (Holmes 137). Other tests originated from common beliefs about witches. An example of such a stereotype-based test was the floating test, where suspected victims would be thrown into a body of water, with both hands tied to their feet. Because it was widely believed that witches could not drown, victims that remained afloat would be pronounced guilty while those who sank were declared innocent. Another example was the 'tear' test, which was derived from the theory that witches lacked the ability to cry.
Artifact 4: This above image shows an item of everyday that was used to put witches on trial and was known as the ducking or swimming method. This device was known as the ducking stool and allowed witches to be dropped into the water. Those who floated were considered guilty, because the water was considered God's creature and had thereby rejected her. If the witch sank and drowned, she would be declared innocent. Thumbscrews, leg vices, and whipping stocks were other devices used to punish witches. 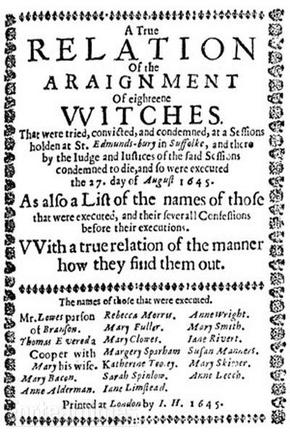 http://www.forteantimes.com/features/articles/124/witchfinders.html
Artifact 5: This pamphlet announcing the upcoming execution of eighteen witches on August 27, 1645; It is a poster listing people who were executed, and what they were executed for.  Witches were tortured until they confessed during formal court trials where witnesses detailed the ways in which they were threatened by the accused witches. While witch trials were held as a form of witch punishment, they also served to excite the Elizabethan public (Rowse 289).