Sanitation in Elizabethan times was awful. The cities had no sewage systems, the people did not bathe regularly, everyone was drunk and-or throwing up, and it was too crowded to avoid any of this. No wonder the Bubonic Plague spread like wildfire throughout England. People did not take the time to pick up their city of take the time to care for it and live in a healthy environment. They threw their trash around and didn't realize that if they didn't pick up their city, this would affect their life in all ways.

Water was a large problem for all people in the city of London. The richest people had a well to take their water from, or got it pumped into their home. The only problem was, mostly all people were not rich. The majority of people grabbed their water from the public fountian. Key word: public. Most everyone got their water from here so it was obviously dirty. And back then there was no filtering or water cleansing. This water came from a river, as most cities were built on a river. London was no different, as it was built on the Thames River. The middle class people got water usually from water carries, who went from house to house bring barrels of water to each house. This water, however, was also pumped in from the Thames River, so basically there was zero difference in the quality of water. The river was disgusting, because sewage and waste were constantly being dumped into it (Hinds). 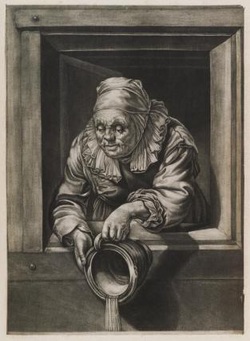 This is a chamber pot, one that was used in Elizabethan England. This gross pot, which was most likely made by the process of Pottery. People used these to go to the bathroom in, meaning urination and the exit of feces from the body. Now they had no plumbing, so therefore they just "went" in the pot. There was no water to flush it away and certainly no sewer system. And nobody can just a pot full of waste lying around in their living room, so what do they do? dump it into the street. Just dump their waste into the streets filled with people; and hopefully no one was directly below you. Their was no drainage in the streets either, and no sewer system. So the urination and feces were just lying in the street, and not getting cleansed or removed. **There is no parenthetical citation for this source, because the sourve came
from a mesuem of all pictures and no authors or pulication dates.

Shakespeare makes a reference to a kite in his play MacBeth. "O hell-kite! All?" (4, 3, 223) He is referring to the perpetrator that killed Madcuff's family.  A kite is a type of scavenging bird that kept the city of London in Elizabethan times cleaner than it would have been. It ate everything it could, and they were usually dirty and carried diseases. They were kind of like a formal rat. Shakespeare refers to them probably because he would have seen so many every day he went outside in the city. He would see them swoop down and eat some dropped food or feces.  The kites aided in sanitation every time they carried off a piece of poop or sewage. *There is no parenthetical citation for this because there is no need to site a website that has McBeth on it. There is no author, just a website with the play.