There were many ways that the people in the Elizabethan times entertained themselves. People know mostly of plays, but those weren't the only entertainment although people did really enjoy the plays. Some other forms of entertainment include bear baiting/ bull baiting,

If bair baiting isn't familiar, it's where a bear is tied to a post and there is Enlglish dogs that went and tried to attack it. People often made bets on who would be victorious. Then the victor would be paraded down the streets with flowers and ribbons on it; if the winner was the dogs, then they would be cheered on much more. This is because it was more likely that the dogs would lose. (59, Chambers) Bear baiting was a very popular form of entertainment that even Queen Elizabeth herself greatly enjoyed. Queen Elizabeth loved this sport so much, that she forbid plays to be on thursdays, so people can enjoy the bear baiting and other activities.  The theatre often competed with popular entertainment like this. The theatre was often closed on the day of the baiting, so it wouldn't interrupt it.  (58, Chambers) Bear baiting was put down in 1835 by parliament which stated you couldn't keep a house, pit, or other place for baiting and the fighting of any bull, bear, or dog. (59, Chambers)

A Quote about Bear Baiting

Card playing was a popular form of entertainment, especially around holidays like christmas. In other times of the year, card playing was mostly enjoyed by aristocrats who could actually afford the cards. A typical deck of cards would be about 12 american dollars which was a lot of money back then. Some people, like an englishman named Jackson, published books to suggest different uses for cards. He suggested that they be used for teaching grammar, spelling, sciences, and arithmetic. Cards were often used for other purposes too. One of the uses is that they were used to put short notes and often small advertisements on the back of cards.Their most common use for cards though was just to play games. (781, Chambers) Some popular games around Europe were All-fours and Maw. Often games like Maw were very confusing but yet very popular and played amongst many royal people. (779, Chambers) People were very determined to win and under no circumstances wanted to lose. They pulled tricks whenever they could. Their goals for card playing, looking at the past couple sentences, are very similar to how we play cards. Overall, card playing was one very popular form of entertainment during the elizabethan era.

A Letter Written on the Back Of a Card

The world renown Shakespeare has made plays in elizabethan times something that wouldn't be forgotten. Some background about plays show that their plays were in a way very different in how they were performed to how they are now. The theaters had very little scenery, all male actors, three levels of different places (balcony:heaven, earth:stage, below: hell), and there were no stage directions. Also the actors had to do much of their work by themselves including putting all their costumes together. Although the plays had these drawbacks compared to what we have today, they were very enjoyed by many people. Some people would sit hours to watch what  what were considered "dull plays", called mystery, morality, and miracle plays. The theatre was so important to people, that they dedicated Sundays to the theatre. Shakespeare took the catastrophic age of the theater before it and raised it to be something brand new and enjoyable. The Globe Theatre represents Shakespeare becoming one of the most famous theaters today. (68, Hoiwitt, Cassell) 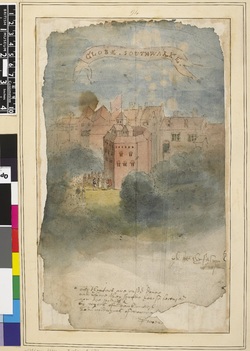 This is a forgery of a 1616 engraving drawn by Claes Jansz. Visscher, who lived during ELizabethan times. The original engraving is displayed in the British Museum. This image is now in watercolor. This relates to entertainment because the Shakespeare plays were performed in this renown place known as the Globe Theatre.