London Streets in the Elizabethan Era

The cobble streets of London in Elizabethan times were narrow and crooked. The slippery slime from the refuse of people added a not-so-silver lining in the walking space. People were hustling and bustling. They were the equivalent of New York, except worse.
The housing was mainly apartment buildings, all crammed together in odd arrangements on the street. There seemed to be little planning with much expansion. People were migrating in and out of various building and shops constantly.
There was no drainage or sewage, so what one stepped in was most likely what someone had once ate. Chamber pot feces were tossed out windows and onto the shuffling people below. The only source of cleaning was the scavenging birds.
Hooves clacking on the stone, wooden wheels bouncing around, and people yelling were all common sounds. Urban environments were obnoxious, to put it nicely. Apprentices yelled and people laughed all with no common courtesy for the rest of the citizens.
Common street festivities consisted of getting drunk at alehouses, bear baiting, gambling dens, and brothels. All of which were not even frowned upon.
A drink to quench your thirst was not the traditional water. Wine literally ran like water in these times. Only for the rich, that is. Middle class people were always drinking some type of alcohol, and being tipsy was an everyday occurrence. In a city of 130,000 - 150,000, most of them drunk, the city was most definitely not sober.
Cities contained the best and worst living. There were luxurious rich people up in palaces. But a few blocks down was a starving beggar, pickpocketing whatever he could law his paws on (Secara). 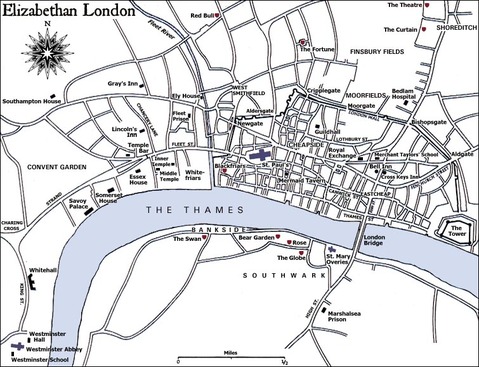 This is a map of Elizabethan London. It does not look very large, yet this was the largest city in Europe at the time. As you can see, everything comes from and is around the Thames River. This was the central part of the city where trade happened and people got water and so forth. The streets were very condensed in the river area, and a lot went on in those small places. There is, of course, the country side where the farmers and field workers stayed. The Globe Theatre is located, on this map, across the river and right off the road from the London Bridge ("Elizabethan London") 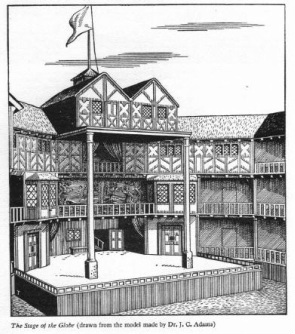 The people of London were not the smartest people in the world. Most, in fact, were illitarerate. Only the extreamly welathy ones had enough money for private schooling. Now a day, we have billboards to advertise and tell us about upcoming events. People then could not read, so that did not work. They used flags and symbols to communicate to the people. The Globe Theatre used flags to tell people that a play was coming that day. A different color meant a different type of play. Black was tragedy, white was comedy and red was history. People would always be flocking outside the Globe Theatre, as it was very busy around there. Many vendors sold merchendise and buyers were all over the place. It was very crowded, and people could see the flag. They then determined the whether to see the play or not. This attratced people and could let them know what was happeneing ("Globe Theatre")