A way to describe the majority of people in Elizabethan times using one word would be: rowdy. They were uneducated and ill-mannered. Unfortunately for the city, this means that the poor were plentiful and the rich were snobby.
Although the middle class was on the rise, the poor still outnumbered the rest of the citizens. Poor living was very harsh. There were different types of poor people.
At the bottom were the Helpless Poor. This consisted of the ill, the sick, and the children. These people were usually dying or were going to be soon. Treated terribly, Helpless Poor didn't have any chance to become rich, or even middle class.
The next rung of the ladder was the Able-Bodied Poor. This group is what exactly what it sounds like. These are people that want to and are able to work, but just couldn't find a job, let alone hold one. There was more of a chance to boot up to the middle class in this group, but the chance was still slim.
The least poor of the poor were the Rogues and Vagabonds. These people weren't necessarily poor. They could have wealth, but the government targeted them like they were poor. Rogues would cause trouble and stir up irritation, so they were counted as the lower part of the social scale.
The poor usually lived in an area that was equivalent to a modern day ghetto. Poor people were accustomed to being shuffled off into a corner of a city and told to stay put. If a poor person was caught in an area that was considered part of a rich district, they were immediately accused of being up to no good or doing something wrong.
Some precautions were took in order to prevent the citizens from being too rowdy. Edward the VI, for example, supplied one of his palaces as a correctional facility. He named it Bridewall.
The middle class was also an abundance, but the space between the poor and the middle class was a massive wealth gap. Even with this wealth gap though, the middle class was still uneducated. They were average in every aspect: decent manners, wealth, and success.
The rich, however, were well educated and mannered. They could afford writing lessons (although there were no set rules), enjoy showy clothes and gossip all day long. Although there was no need to be born into a royal family, is was certainly helpful when it came to getting rich (Trueman). 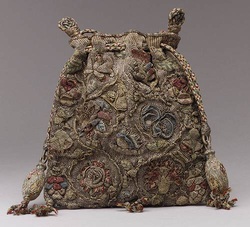 This purse was not one for the smelly, scavenging poor. Only the richest of people would use this. A beautifully crafter purse as this is a great comparison between the rich and the poor in Elizabethan London. The poor were lucky to have a job and the clothes on their back. A rich woman would be seen flaunting this purse down the street,  causing the wives of the Able-Bodied poor men to be envious. There was almost a sense of wastefulness in the way the wealthy operated. Other than Edward the VI, nobody took any notice to the poor. The ghettos they lived in were like rat-ways to the rich. If a rich person were caught in a poor part of London, their reputation would plummet and nothing but a pile of money and luxury would be left. *There is no parenthetical citation for this source, because the sourve came from a mesuem of all pictures and no authors or pulication dates.

This artifact is a primary source of Queen Elizabeth I 's signature. Obviously, even the rich weren't the brightest people. The Queen couldn't even write her name legibly! This artifact shows that people in Elizabethan times were generally stupid. And even if they were naturally intelligent, nobody would know because that person would spend all their time getting drunk and working (Ridgway).