Witches and Where to Find Them

If you know what to look for, finding a witch can be as easy as one, two, three.

What did witches do? 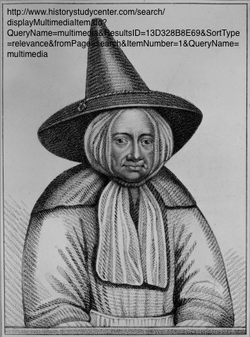 Artifact #1: Witches were believed to have entered an unholy pact with the devil and were portrayed in seemingly strange ways. Many of our stereotypes about witches have arisen from Elizabethan practices and other appearances that were associated with witches. This witch is wearing a high-pointed black hat for example. Witches supposedly rode on broomsticks, and black cats were helpful in discovering the identity of a witch. The negative connotation involved with witchcraft slowly spread to these items as well.
This specific photograph depicts an English woman named Jane Scrimshaw. She was said to have lived from 1584 until she was executed in 1711, but her longevity is highly doubtful, considering the sanitation and living conditions in Elizabethan England. This rumor simply supports the belief that witches could live very long lives and outlast their victims.

1. Witches were almost always poor. Since it was easy to take advantage of the poor, and there were several cases in which witch hunters bullied, beguiled, or trapped the poor into confessing guilt (Rowse 289).

2. Witches usually diverged from the social norm (Rowse 287). From the person pockmarked with strange birth marks to the old woman with male characteristics, most accused witches had physical defects or traits that set them apart from society.

4. Witches were thought to always have a "familiar", which accompanied the witch in the form of an animals. Some examples of susceptible animals thought to be familiars by the public were toads and cats. This most notably led to a massacre of cats in England.

5. Some witches also had special markings on their body. These markings, which included birthmarks and zits, were usually identified on an accused witch's body and this was used as evidence in convicting the witch during a trial.

6. Most witches were women. Due to their low social status in comparison to men, women were also major targets. In addition, people viewed witches mostly as a feminine character.