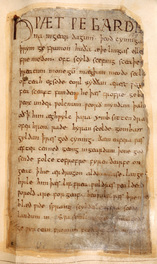 This is a sample of the first page of Beowulf, a poem that was written in Old English, English that contained clear influences from Saxon and Viking languages (McCrum, Cran, and McNeil 55). This influence made the slightly confusing, inconsistent Old English to be a bit more simple and readable, both grammatically and in the sense of spelling and pronunciation (Peters 27).
This page of the poem was not printed, but rather written as it was written during medieval times - when general printing was rare except for the Bible (Claiborne 72).
Beowulf has over 3,000 lines, and was passed down orally rather than having many written copies of the poem. The actual poem features stories about bravery, heroism, treasure and revenge (Brévart-Demm).

This video is a reading of lines 7 to 11 of Beowulf in Old English, read by Professor Craig Williamson. Williamson explains this part of Beowulf, Grendel is coming into the great hall as he does every night, and that Beowulf (the main character) is in the hall as well - for the first time.
Williamson mentions that names for each character tend to differ, such as Grendel (the antagonist) both being called a warrior as well as a fiend. Both characters are also called "awe-inspirerer". He also mentions that light-hearted jokes are inserted into the passage, jokes both told from Grendel's and Beowulf's point of of view.

When Williamson puts some examples of the Old English up on his blackboard, it is easy to tell the similarity to Saxon and Viking languages (McCrum, Cran and McNeil 55) .

Williamson goes on to show some examples of artefacts mentioned in the actual text, among other things.

The actual reading starts at 5:02, in which WIlliamson starts to read Beowulf. It is read based on the words' stresses, and a good idea of the entire rhythm of the piece is had due to the known stresses of most words. The entire few lines read have a distinct sing-song sound to them; this could be due to the fact that English then was much less monotone than it is in Modern English. 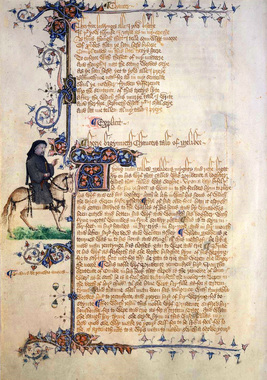 This is an one-page excerpt from the Canterbury Tales, a collection of stories that were written by Geoffrey Chaucer in the late 14th century. Most tales tend to be relatively short, but written in Middle English verse. This means they sometimes rhymed, or had a certain meter to each sentence or verse. This gave it a poetic feel, and made it also easier to listen to if a tale was being told aloud to a group of people.
Chaucer's Canterbury Tales shows the Great Vowel Shift taking place, since his writings were right at the beginning towards the middle of it. Certain words that would have rhymed in verse or meter then do not now, either due to spelling or the pronunciation of vowels changing over time. Even from verse to verse or story to story, spelling changes and vowel discrepancies are evident.


(img src: The Evolution of the English Language by George H McNight)

Reading of the Canterbury Tales

Reading of the Canterbury Tales by Geoffrey Chaucer in Middle English, read by Professor Andrew Troup.

As Troup reads, the sing-song element shown in Craig Williamson's reading of Beowulf is mostly gone. There is still a clear rhythm to the reading, but it has also lessened. Each vowel in a word sounds slightly shorter, almost more round (Chomsky 45). The pronunciation from word to word to the untrained ear may sound the same, but comparing each same vowel in a word can sound slightly different - a feature that Middle English shares with Modern English (Chomsky and Halle 67, McNight 23).

Shakespeare's first folio. It contained Comedies, Histories, and Tragedies. Shakespeare wrote in Early Modern English, which sometimes featured pidgins - dialect-like forms of words, these words' spellings and pronunciations fluctuated greatly (McCrum, Cran and McNeil 67).
This was a printed folio, it was the first standardised edition of Shakespeare's work (Ackroyd 488).

Bryson, Bill. English and How It Got That Way. New York: William Morrow and Company, 1990. Print.

McNight, George H. The Evolution of the English Language: from Chaucer to the Twentieth Century. New York: Dover Publications, 1928. Print.