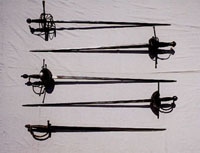 This is a picture of a few examples of the rapiers used back then. It was the most common sword used by nobles during the Elizabethan Era (Alvarez). - Photo (Visual)

"Fetch me my rapier, boy." (I, 5, 54)
This quote, from Romeo and Juliet by William Shakespeare, was said by Tybalt. He had seen a Montague (Romeo) at the Capulet party. Because Tybalt is so hot-headed, he wanted to fight him with his rapier, which was the most common weapon used during this time. - Dialogue (Narrative Writing)

A shorter version of a sword, which wasn't very effective in a sword fight because of its small reach.

A dagger with an h-shaped handle (double-edged) (Mahabal).