The Judicial system in Elizabethan England was an old system, passed down from the Anglo-Saxon Era. People convicted of crimes were usually held in jails until their trials, which were typically quick and slightly skewed in favor of the prosecution ("Torture in the Tower of London, 1597").

The way the system worked was that one man would have to accuse another man of a crime. They would bring the person before an official of the state and the convicted would be brought to a jail to await trial. The trial would usually be brief and favored the prosecution. The convicted's fate would be decided by a judge or official. Then, whatever sentence decided would be carried out.

If you were of noble blood, the rules would be very different from if you were a peasant. Noblemen were in favor with the Queen, so noblemen would get less severe punishments than a commoner for the same crime.

Laws were made and passed by Queen Elizabeth and her Parliament. 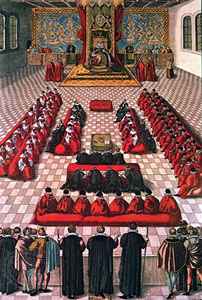 A painting of parliament in Elizabethan England. (Sommerville)