Childhood life during the Elizabethan era was quite different from what children experience in modern times. Boys were the only children permitted to attend school. The girls stayed at home and learned to cook, and sew. The boys learned mostly about the classical arts. Depicted below are two teachers, or better known by their Latin-derived names, rhetor, of the classical arts. Additionally, until a boy was about 6, he wore skirts like the girls. Once he received his pair of pants, the family celebrated with a coming of age party known as "breeching". Boys whose parents cannot afford their tuition helped their family in the fields.
Water was not usually ingested. as the English saw no issues with children drinking alcoholic beverages such as ale and wine, contrary to what studies show today. Wealthy children were taught strict manners and, as there were no laws against chastity, the children were scolded and punished harshly if they were to break certain rules. These rules concerning manners were made into a catechism:
Reverence thy father and mother as Nature requires.
If thou hath been out of their presence for a long while, ask their blessing.
Stand not too fast in thy conceit.
Rise early in the morning to be holy, healthy, and wealthy.
Say thy morning prayers.
In church, kneel, sit, or stand devoutly. Do not cast thy eyes about or chatter with women, priests, or clerks.
At dinner, press not thyself too high; sit in the place appointed thee.
Sup not loud of thy pottage.
Dip not thy meat in the saltcellar, but take it with a knife.
Belch near no man's face with a corrupt fumosity.
Eat small morsels of meat; eat softly, and drink mannerly.
Corrupt not thy lips with eating, as a pig doth.
Scratch not thy head with thy fingers, nor spit you over the table.
If thy teeth be putrefied, it is not right to touch meat that others eat.
Wipe thy mouth when thou shalt drink ale or wine on thy napkin only, not on the table cloth.
Blow not your nose in the napkin where ye wipe your hand.
Chew with thy mouth shut.
(source of catechism: http://www.elizabethan.org/compendium/40.html
In land-owning families, the oldest boy in the family inherits all the land, even if the oldest child is a girl. 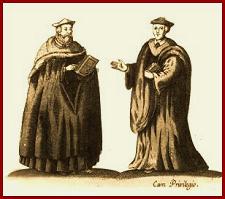