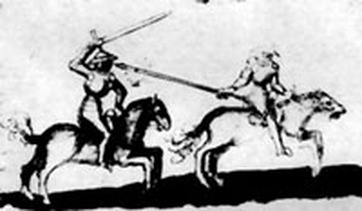 A painting of combat on horses with lances. By Talhoffers Fechtbuch in 1459 (Alvarez). - Painting (Item of Everyday Use)

http://www.youtube.com/watch?v=SF4j-xqpfKA
This was a video about the lance. It showed how people would use it when they were charging at each other, displaying the proper technique (Loades). - Video (Music/Audio)

Used for thrusting at an opponent. Also used by foot soldiers.

Used by soldiers on horseback, this weapon was about 12 feet long, made of metal, and sharpened to a point. It came in two forms: light and heavy. The heavy form was used to unhorse the rider in single combat, or smash through the armor of the enemy. The light lance was used as a projectile from horseback, like a spear or javelin (Alvarez).