Forms of Torture in Elizabethan England

Criminals who committed serious crimes, such as treason or murder would face extreme torture as payment for their crimes. Torture was also used to force criminals to admit their guilt or to force spies to give away information ("Torture in the Tower of London, 1597"). 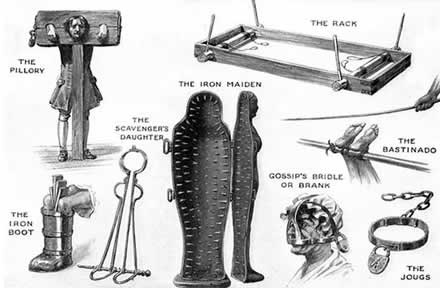 From Left to Right:
The Pillory: it securely hold the wrist and neck of the accused. They would usually be left in the open. This form of punishment was meant to humiliate and be painful while it certainly was uncomfortable. A person who was put in the pillory would often Be put in a public place where depending on the level of their crime people would throw garbage and rocks at them
The Iron Boot: It was a turture device that put the victm's legs between two metal plates that were usually adorned with spikes. Boards were wedged between the legs increasing the pressure until victim passed out from the pain, gave up the information or their shins were crushed. Becuase of this the iron boot was also known as the shin crusher.
The Scavenger's Daughter: The victim was forced to crouch on one half of a loop. Later, the other half was closed around the victim. A screw was tightened and the victim was forced more into an involuntary crouch. Ribs could crack and the spine might be dislocated. If The victim was crushed even further sometimes blood would gush out of the victim's fingertip's and face.
The Iron Maiden: It is an upright sarcophagus with strategically placed spikes inside. The victim was forced to stand inside of it and when the doors were closed the spikes would peirce the victim;s vital organs, but the spickes were short so that the victim would not die quickly but slowly bleed to death. Two spikes were strateically placed to peirce the eyes of the victim.
The Gossip's Bridle(Brank): A bridal which wives would have to wear if they were seen as witches, scolds, or shrews. There was a curved plate that extended into the mouth which was usually studded with spickes making it hurt to move the tounge, thus rendering the victim unaple to speak. It was a form of torture that could also be used as a form of public humiliation. There was a ring in the back which a chain could be attached to allowing the husband to parade his wife around town.
The Rack: The victim's limbs would be tied to a crank of some kind. The crank or wheel would then be turned so that the victim's limbs  would be pulled. The victim's limbs would be dislocated and sometimes torn off.
The Bastinado: A form of punishment where the soles of a vitim's foot would be whipped or beaten. This would be effective becuase of the structure of the foot with all the bones, nerve endings and tendons. The victim would usually be hung upside down and the soles of their feet were brutally beaten with whips or canes. This would usually take a long time to heal and was very painful.
The Jougs: The metal collar was placed around the victim's neck. The collor was usually attached by chain to the wall of a public place where the would be humiliated.

One common form of torture was to be placed in "the racks". The prisoner would be stretched from head to foot and their joints would become dislocated causing severe pain ("Crime and punishment in Elizabethan England").