Galileo, who created the telescope shown below, was a famous thinker and inventor in the Elizabethan Era. This thinker first was acknowledged for his discovery of the law of the pendulum; stating that when a pendulum swings back and forth, it goes the exact same distance to the left as it did to the right, in the same swing. This was a major advancement in the modern knowledge of physics, and pushed Galileo forward to learn more about the world around him.

Galileo Galilei is credited with creating the modern skeleton design for the telescope in 1609, a device used to magnify or examine not only far away objects on land, but to study and learn more about the universe that surrounds the world.  This particular telescope was found in his very own studies and is believed to have been used by Galileo himself.  Since it is a early telescope it only has the magnification of  x10, meaning it could magnify an object and make it appear 10 times bigger.  (Galileo’s Telescope. Universe Today, n.d. Web. 27 Mar. 2013)
Galileio's most famous contribution to society however, was his astronomical advancements. Galileio was able to do this because of his newly created telescope. This initial model of the telescope was so powerful, he was able to see Saturn's rings, and identify three of Jupiter's moons! He drew a map of what he believed the solar system around Earth looked like, as seen below. He labeled everything in Latin, and with this map, proved that he was a hardcore supporter of Copernicus' heliocentric theory, or that the world revolved around the sun. Until this theory was mentioned, people believed that Earth was the center of the solar system, and that the sun and other planets revolved around the Earth. 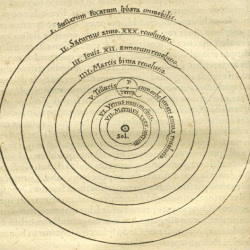 Genre: Picture Parenthetical Citation: ("Heavenly Revolutions." San Diego State University. San Diego State university, 2011)
This artifact is a picture of a sketch in Galileo's journal. It was found in Galileo's study in Venice, Italy and It shows the heliocentric theory which states that the Earth revolves around the Sun instead of the commonly believed theory that the Earth was the center of the solar system.  This theory was quite significant to the world of science as it discredited many of the false theories accepted about the world at that time and changed the face of astronomy forever.  Many of his findings and discoveries are still used today.