Sports were a very important part of life during the Elizabethan era. They were a form of fun, entertainment, and skill. People mainly of the upperclass and nobility would participate in these more elaborate sports and activities. The sports were considered a form of entertainment for the people participating in them, and for the citizens attending the games, duels, or matches.

Bull running was just one of the many fast and highly dangerous sports of this time. This sport showed off a man's bravery, agility, and ability to make decisions under pressure. Hats were thrown at a bull enclosed in a cage, until it got extremely worked up and agitated. Once released, the bull would run madly all over the crowded streets. The men and boys would chase, dodge, and block the attacks of the bull. This sport resulted in killing the bull for dinner later that evening.

Hunting and hawking were other forms of sports. It was not just for fun all of the time, because often people would bring home there catch for food later that night. People mainly of the upperclass, and nobility hunted for sport. There were different forms of hunting, some more strenuous, and some more relaxed. Both men and women enjoyed hunting, and horses and dogs often accompanied the hunters. The main prey for hunters were doe and stags, foxes, boar, birds, otter, and rabbits. Hunting events were times to show off your horse, clothes, and weapons.


Fencing was another sport during the Elizabethan era. Again, it is mainly for the upperclass and nobility to enjoy. Fencers trained and practiced for years in order to become skilled at this sport, and the weapons and swords used to fight vary in many shapes, sizes, and weights. Spectators and citizens bet on different fencers for the number of times they hit each other, or won.

Football was rough, dangerous, and risky. It was a team sport made up of many brave men. This sport does not relate to the common football we have today in America, or soccer. Although it is somewhat similar to soccer, it is called football because the men would run on there feet, instead of riding on horses. 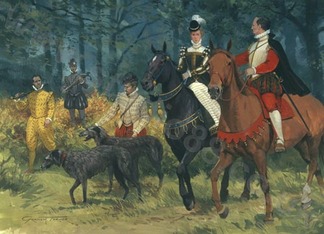 This is a painting of hunting in the Elizabethan era. It was painted by Graham Tuner. This is a modern day painting, and not an original. It shows how the upperclass would enjoy hunting off of their horses, and how both men and women engaged in this sport.

This is a Youtube Video Clip about fencing in the 1600's Elizabethan ere. It shows re-anactments of the matches, and different weapons that were used. Some examples of the weapons used were dueling swords, fencing swords and even canes. 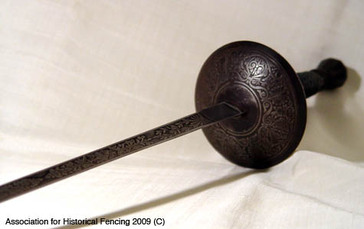 This is a dueling, or fencing sword. This sword has a triangular shaped blade that is tapered,  and more blunt at the end. It is not used in battle, or for killing. Similar swords are used in fencing today, except the blades are thinner and are composed of a lighter weight material.  Below is a longsword which was also sometimes used in matches and duels.