Elements of an Elizabethan Dress

What exactly did Elizabethan women wear? Did the upper class always wear a french style gown?

What women wore depended on their class, age, background, body type, and individual taste. Older women typically wore more traditional dresses, as they preferred to keep their fashion modest. They were not very accustomed to wearing heavy dresses with layers after layers of silk, cotton, and velvet with an addition of a few dazzling diamonds. A nice, humble dress with only 2-3 layers of cotton appealed to them much more. For background, rural women were not very privy to the latest London fashion. You can perhaps imagine a southern cow girl wearing boots and plaid shirts if this were in the 21st century. Large women with a perfect hourglass body favored the styles that flattered their impressive figures. But, overall, the choice of dress all wholly depended on the women's individual taste. They could wear gowns that were French, round, loose, Italian, Flemish, or Polish (Leed). 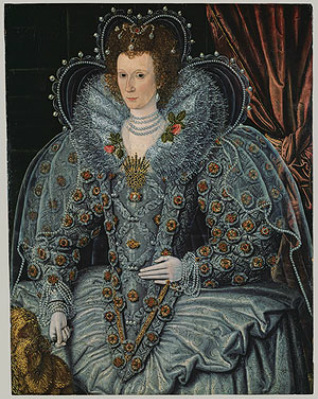 This painting was painted by a British painter during the late sixteenth century. The painting was influenced by Nicholas Hilliard who lived from 1547 to 1619 and painted many paintings with a similar style. This painting depicts a noble-woman because of the expensive clothing and many jewels. Notice the pale face and neck, also representing a noble class. The features of this woman include wide-set, bright eyes; a straight, narrow nose; and a very high forehead. These features were sought after during the Elizabethan era and were considered to be beautiful. British Painter. Portrait of a Noblewoman. 16th century. Museum, New York. The Metropolitan Museum of Art. Web. 2 Apr. 2013. 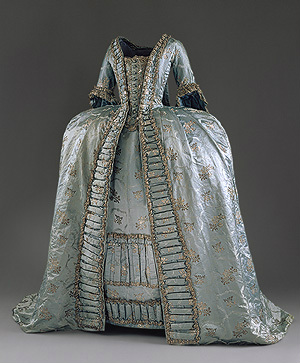 This is an image of a French style gown. Initially, this gown was worn on informal occasions. However, as additions were made to the dress, it became a more formal attire. The gowns were often stuffed with sheep's wool to give them volume. The trim on the dresses were also very elaborate. Many people wore the original dress and just changed the trim. French. Robe a La Francaise. 1765. The Metropolitan Museum of Art, New York. Heilbrunn Timeline of Art History. Web. 2 Apr. 2013.

Want to learn more about the lower class dresses, facial beauty, and accessories? Click on the following buttons, and they will take you to your desired page!