Jewelry
Elizabethan women wore a vast amount of jewelrey. The gems that the upper class women wore would be cabochon cut. In other words, this meant that the top of the gem would be carved into a half circle and the back would be flat. The gems worn would mostly be a oval or round shape (Leed).

Wedding
During the Elizabethan Era, wealthy women wore wedding rings on their weddings. Wedding rings were not considered very sentimental, however, if one did wear a ring, they wore it on their left hand on the finger next to the pinky. They wore the ring on this finger because they believed that in that finger, there was a vein that lead to the heart. Some rings had engravings on them that represented the newly wed couple's relationships (Secara).

Pins
The women would also use pins to hold up their skirts. The pins would be used to keep the many layers of skirts and cloth in place. The pins would be carefully kept and sharpened periodically to ensure that they wouldn't break or be too dull to pierce through the layers of cloth. The pins were stored in pin cushions and there were many sizes of pins ranging from very skinny, to hold up light weight clothing, to very thick, to hold up heavy clothing. The pins were a very important accessory to the Elizabethan woman (Leed). 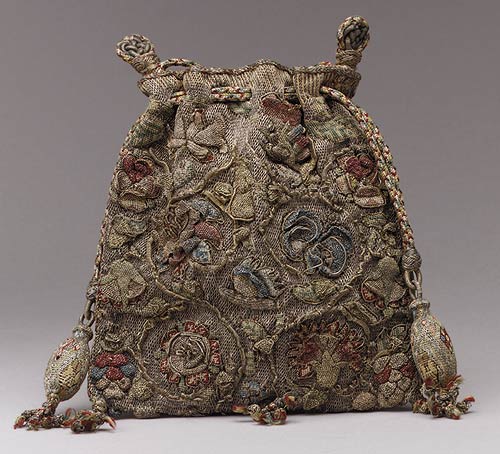 This is a purse that was used during the late sixteenth century. Notice the elaborate designs on it formed by colored silk and silver and gold thread. These designs were stitched onto the linen that the purse was made out of. This type of purse would be used by many women during the Elizabethan era, especially the noble women, to hold scented herbs and spices to cover up their unpleasant skin oder. This was used because washing was not a very common practice during the Elizabethan Era. The bag is closed with a draw string. English. Purse. late 16th century. Museum, New York. The Metropolitan Museum of Art. Web. 2 Apr. 2013.