Shoes
During the first part of the Elizabethan Era, the men wore splay-footed shoes. The shoes had very thick soles and a strap with a buckle around the instep. However this style of shoe hanged and during the second half of the century they would wear boots made out of soft leather. The boots would be fitted against the leg and ended right at the knee or at the calf. They would be fastened by buckles, lacing or buttons on the outside of the boot. If the weather was bad, an over-shoe would be worn. They were made out of leather and had very thick soles that deepened at the heel. The type of shoes worn by men changed throughout the Elizabethan Era (Lister 183).

Accessories
The Elizabethan men also wore jewelry and had accessories. Large, jeweled chains would be worn around the collar bone and shoulders. These chains would sometimes  be used to hold up the men's cloaks or lockets and pendants. Smaller chains would be worn to hold jewels and rings. A single-earring, usually a pearl-drop, was also considered very fashionable for men. Gloves, made of leather or silk and often perfumed, would also be carried around in a man's belt which was also used to carry his purse and a large, laced handkerchief. Lace would also be worn by gentlemen. Elizabethan men had many accessories (Lister 184). 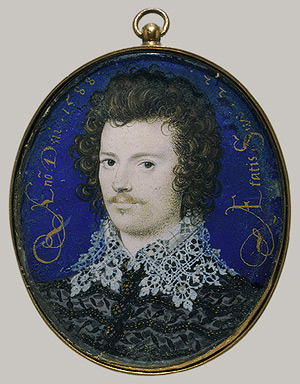 This is a painting drawn by Nicholas Hilliard in 1588. The man in the picture is thought to be Robert Devereux. Who was the Second Earl of Essex. He first arrived in the Queen's court in 1587 and quickly became a favorite of the queen. He was therefore made Earl Marshal in 1597 and Chancellor of Cambridge in 1598. However, in 1601 Devereux was executed after raising a rebellion against the queen. This man was twenty-two years old when the painting was painted, which can be seen engraved in gold lettering on the left side of the painting. Notice his fancy clothing and the lace at the top of his shirt. This and his fancy and ornamented top, shows that he was of a higher class. Hilliard, Nicholas. Second Earl of Essex. 1588. Museum, New York. The Metropolitan Museum of Art. Web. 2 Apr. 2013.